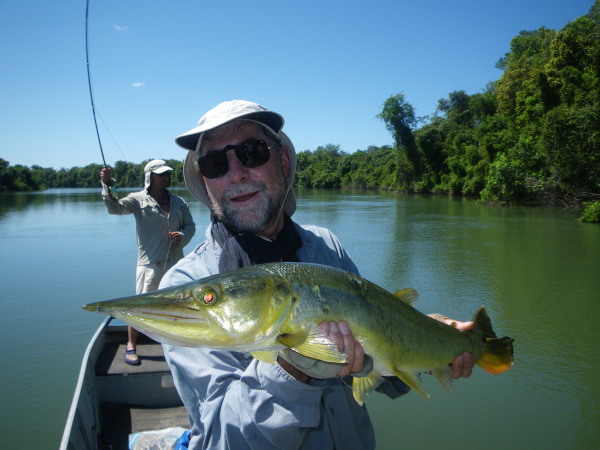 Amazonia generates a true excitement in the world of sport fishing. More an more north-american  flyfishermen  and more recently europeans come to Brazil, Colombia, Venezuela, and  andean countries. If flyfishing in subtropical America is still in its infancy, it appears that this modality knows a growing interest, and probably will become  a great technique of the future. But for the time being, for lack of local mentors,  the some flyfishing addicts are forced to draw largely their inspiration  from the north american school. We dont't doubt  that an independent amazonian school will  soon emerge  from these influences. 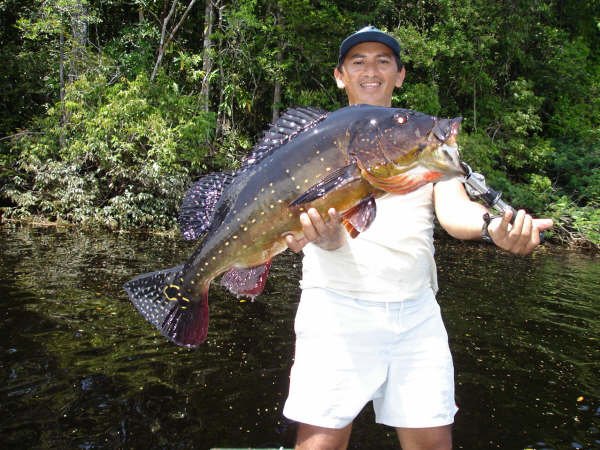 speckled peacock-bass of the Rio Negro

In Amazonia, when we speak about flyfishing, we are obliged to omit any mention of entomlogy, as opportunities to operate traditional dry fly fall within the exception, and are so rare that they cannot serve as  basis directed by immuable and constant rules.

In the jungle, the nature is generous  in all kinds of manifestations whether floral or animals. The insect kingdom is not forgotten, and these far countries of south America are a true paradise for the entomologist, and disciples of Frederic Halford. There are myriads of caddis, dipters, sialis, ephemeropters, and even at dusk, carpets of spents at the surface of rivers and lakes. Then, terrestrials, like grasshoppers, locusts, crickets, and to close this  inventory, beetles, including the largest in the world. In a word, there is, in tropical America anything that, according to the norms of temperate countries, would  do rise at the surface a whole aquatic world, which for obscure reasons that find answer in ethology comparative, seams to have an extremely limited propensity for insects. Only a few bait-fish whose size does not exceed that of a minnow, seems to rise really with regularity on hatches of littles ephemeras at nightfall. 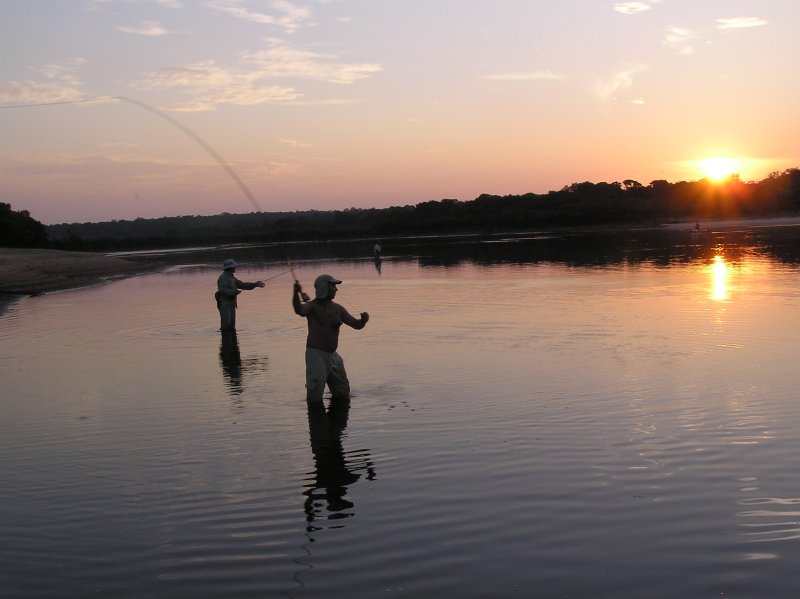 We 'll never pretend of course, that a big beetle accidently fallen into the water will not be caught by a predator, but the size o these insects is such that it's difficult to imagine an other lure than a sea popper to constitute an imitation or at least a possible figuration. So, except ignorance or lack of informations from our part, due to the wastness of a world where everything have to be discovered, It's obvious that the temperate countries flyfisherman freshly landed in Amazonia, should have the humility to leave aside almost its passed experience, and only keep a few basic elements as the cast, althought it is subject to circumstancial adjustments, or its few attemps with lure-flies, either on black-bass, pike or trouts in running and still water.

This site is consecrated, as its name suggest to original flyfishing in Amazonia. But under this generic, we mean rain-forest flyfishing  in general, with  extensions to mangroves that are also jungles in the same areas of the planet, that offer great possibilities of flyfishing too, against other interesting species of game fish of salt and brackish water.