The arapaima or pirarucu

THE ARAPAIMA or PIRARUCU

arapaima gigas of the osteoglossidae family

The largest freshwater scaled fish of the planet. Strange animal from another age that can reach 250 to 300 lbs for a length of 10 feets... And this monster, because it's really a monster takes very well  the flies which he inhales from a distance of several inches with its gigantic " vacuum cleaner" mouth. It's also called pirarucu* in Brazil and paiche in andean countries.

Where is found the pirarucu? Almost everywhere in Amazonia, but less than we would wish it, for sure. The quality of its flesh, and the relative facility of its capture are responsible for its quasi-dying out a few decades ago. Indeed, you have to know that one of the more noticiable caracteristics of our large fish is to rise to the surface to breath atmospheric oxygen at regular intervals in the manner of the tarpon. Then, once spotted, it only have to wait for the next emergence of our animal, almost always in the same place, and to harpoon it as soon as it appears. Subject to trade on a large scale, the fillets of pirarucu were salted and packaged as cod, and even shipped to Europe where they were often eaten under the name of dryed cod, the famous bacalhau of the portuguese colonizer of Brazil. Maybe, your grandfathers have eaten salt arapaima without knowing it.

But fortunately, one knew how to react: some reserves  where our giants lead a happy and peaceful life have appeared in various parts of Amazonia. The arapaima have even be introduced  far from its native countries, especially in Thailand. Then its stock-farming is relatively easy: requiring little oxygen, and very eclectic about its diet, it only needs wide space and animal proteins in quantity.

The outfit have to be rather tough, because we can speak about primary brutality fight, even if the animal is relatively  fastly out of breath. So the tackle for large tarpon is the more suitable: rod n° 12, floating or intermediate line, corresponding fly-reel with a powerful and smooth disk brake containing a good length of backing. 80 to 100 lbs mono shock-tippet, because like   the  tarpon's, the mouth of the pirarucu is also abrasive like crude concrete without forgeting its hard scales large like coffee saucers and commonly used by the native women as nail-files. 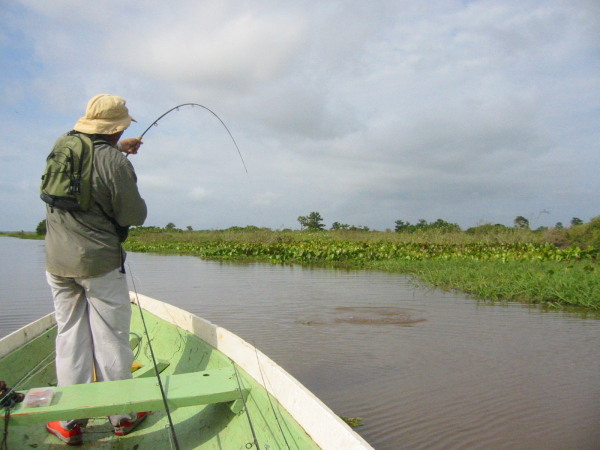 Playing a big one

It consist to cast your flies close to each supposed post and above each fish you have seen breathing to the surface. Stripping the fly doesn't need to be fast. Expect to get homeric fights, and  dont believe to exhaust the arapaima by outgoing  its head out of the water. At the contrary, it allows him to regenerate its muscles by inhaling atmospheric oxygen,  making him an endurance monster. Instead try to prevent him from climbing at the surface, even if it needs to imerge the entire rod in the water. We ever did this error at our expense, and a fight that should initially last half an hour can go on and on, and even become a punishment both for the fish and the fisherman.

All  large flies fit to the arapaima, provided they are dressed on  stout an perfectly sharpened hooks.  Indeed, the pirarucu's mouth is extremely hard ( osteoglossidae means etymologically: bony tongue). Large streamers ( 5/0) are perfect. Don't economize on the length, the arapaima is a fish who aspires litterally its preys. So it's unnecessary to dress yours flies in tandem. Privilege the volume, and dress patterns that move a lot of water, style " whistler " used for fishing tarpons in the muddy waters of central America rivers. A " rattle box ", the famous ball box currently included in most tropical casting lures, will trigger attacks in the often murky waters of the pirarucus locations, where the auditory factor overrides the visual. So, don't hesitate to include this gadget in your patterns. The tube-flies  can also be effective, because this style of dressing allows to make gigantic flies without it's necessary to use sailfish hooks. We got excellent results with this type of patterns conceived and designed  for the Nile perches of the Lake Nasser in Egypt. and used succesfully on them.

The Enrico Puglisi concepts ( epflies), perfectly evoking the circular shape of customary preys of the arapaima that are piranhas and other characidaes, may also be very efficient flies.

after the fight, the bath...

*Pirarucu ( pira-urucum) means globally in amerindian tupi language: red fish. Pira=fish. The urucum is a small red  fruit the pulp of which  some tribes of Amazonia paint their bodies with.  Indeed, the caudal part of the arapaima has a wonderful gradual range of colours that goes from the purple to the fushia. This characteristic is more marked on the male than on the female.